Did you remember to walk across Washington Street at Petaluma Blvd. N, after looking at the Heritage Mural (Strangeness Blog #12), and take a close look at the Bill Soberanes and Wrist Wrestling Capital statue? Bill Soberanes and the statue are probable very familiar to most Petalumans; however, what might still be strange is the focus on “wristwrestling.” 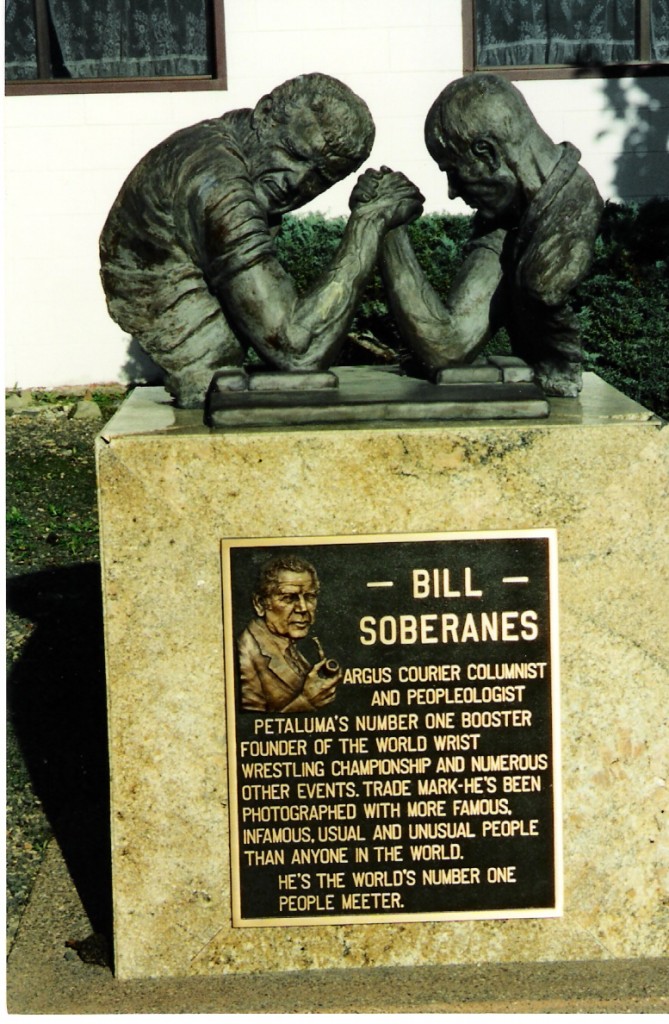 The statue and plaque were dedicated in 1988 to honor Bill Soberanes and give a very brief summary of Mr. Petaluma’s contributions to our favorite river town: “Bill Soberanes – Argus Courier columnist and Peopleologist. Petaluma booster and founder of the World Wrist Wrestling Championship and numerous other events. Trade Mark – He’s been photographed with more famous, infamous, usual and unusual peoople than anyone in the world. He’s the world Number One People Meeter.”

What might be strange to many Petaluman’s is why Petaluma was known as the Wrist Wrestling Capital of the World. A quick look at various web sites revealed the following facts:

* The matches began locally in Gilardi’s Saloon in 1952.

* The event quickly progressed past county and state bragging rights to become the first World Wristwrestling Championship, held in 1962.

* In 1968, Charles Schultz drew 11 comic strips where Snoppy was coming to Petaluma in order to compete in the World’s Wristwrestling Championship contest.

* In 1969, business partner, Dave Devoto, contracted with the American Broadcasting Corporation and the World’s Wristwrestling Championship began a 16 year relationship with ABC’s Wide World of Sports.

The Wristwrestling Championship contest moved to Reno after Bill Soberanes died in 2003; but his founding of the event certainly put Petaluma on the world map.

Stay tuned to learn about another strange event started by Bill Soberanes.