When we were walking along East Washington Street, checking out the P&SR railroad tracks that cross at Water Street, we rediscovered two more strange but familiar spots. On the side wall of the Old Shanghai (former Goodwill) building is the Heritage Mural created by Steve Della Maggiora in 1998 that illustrates significant phases in the history of our favorite river town.

The “Egg Basket of the World” link, http://roadsideamerica.com/story/11508 describes this mural as follows: “It depicts the heritage of the area, starting with a Miwok Indian Village, then the appearance of the White Man in the form of General Mariano Vallejo and his adobe estate. Then follows a steamship, blacksmith shop, and steam train.” 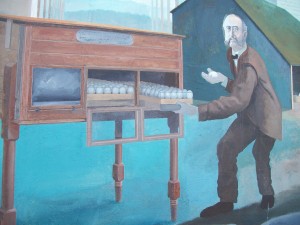 The dairy industry is represented by Lyman Byce, co-inventor and manufacturer of the first practical egg incubator in 1879.

The strangeness of the mural is: If you glance way to the right, on a curbside signal box, there is the figure of a woman. 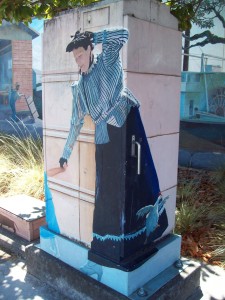 This addition was made in 2000 in order to add a three-dimensional. She is Deborah Riddle, former president of Heritage Homes and the Petaluma Museum Association.

Stay tuned as we cross over Washington Street to another familiar, but strange object –
The Wrist Wrestling Champ Monument.