In my last Strangeness blog (#9), I featured the Petaluma Trolley Living History Library with its restored trolley and railroad cars. I also mentioned the railroad built a spur line along the west bank of Petaluma Creek in 1922 that ran behind the warehouses. Included in that project was the construction of a trestle. (April to June, 1922) This trestle is a very familiar spot in Petaluma; but its past and future is a strange story. 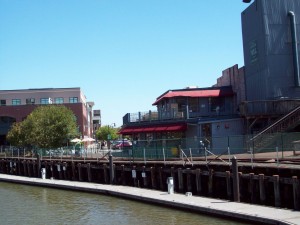 According to an Historic Structure Report (2007), “The spur linked to the P&SR’s main line at approximately Payran Street, ran south and crossed Washington Street, ran across the Trestle behind the G.P. McNear Company mill (now known as the Great Petaluma Mill). After the Trestle, the spur continued south and terminated at a turkey farm at approximately H Street. The Trestle occupied land immediately adjacent to the G.P. McNear Company’s wharf, a swath of real estate not owned by George McNear. To provide the rail link that George P. McNear desired, the McNear Company authorized a construction easement to modify the McNear wharf for direct attachment of the Trestle to the wharf.”

Even though the trestle isn’t listed in any historical registers at the local, state, or national levels, it is considered historical significant due to its association with the economic expansion of Petaluma when it was declared the “World’s Egg Basket.” The 2007 Historic Structure Report also stated: “The Petaluma Trestle serviced a valuable spur line for decades. Warehouses could now load directly on to rail cars on the spur, while cargo could be loaded to and from rail cars on to boats on the Petaluma River at McNear Wharf.” 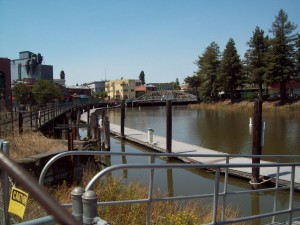 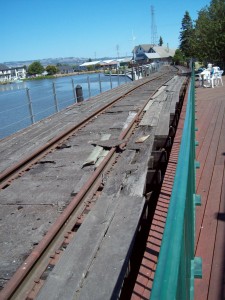 Although this spur line (including the Trestle) proved to be an important link between the agricultural and industrial businesses of Sonoma County, the profitability of the railroad was impacted by the increase in the use of the automobile and trucks for traveling and trucking throughout the Bay Area. Eventually, the P&SR RR Co. was sold in 1932 to the Northwestern Pacific Railroad (which was owned by the Southern Pacific Railroad Co.) Longtime Petalumans will remember when the Steamer Gold stopped service to San Francisco in 1940, and railroad freight service continued until August 24, 1950.

The Petaluma Trolley Living History Museum is the primary group of volunteers dedicated to the preservation and restoration of the trestle, as well as bringing a trolley line back to Petaluma. The trestle is approximately 500 feet long and runs from the southern end of Water Street to the Petaluma Yacht Club. Today, it is owned by SMART (Sonoma-Marin Area Rail Transit.)

Stay tuned for future stories and events that will help remove the strangeness of this familiar spot in our favorite river town.