Fortunately, these two adventurous human beings had the opportunity to meet and talk face-to-face, years after Fred’s historic flight, but before Fred died on October 14, 1961, at the age of 85. 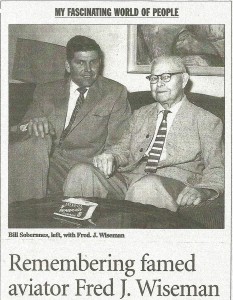 It’s now the next day after posting the thoughts expressed in Part I and I wanted to add that when I drove by Bill’s former residence near the intersection of Lakeville and East Washington, where he was often seen sitting in his rocking chair on the porch watching his fellow Petalumans drive by, I had to glance over and salute. Then as I passed the Bill Soberanes “Wristwrestling” statue on the corner of East Washington and Petaluma Blvd. I wondered how I might let him know about the “personalized” stamps that were finally produced to honor Fred Wiseman.

As long-time Petalumans know, Bill wrote columns for the Argus-Courier from June 2, 1954 to June 2, 2003, 49 years to the day. One of his earlier columns was titled, So They Tell Me, and a second was his famous Peopleology interviews . This is why I would wave (symbolically) to Bill in memory of the many hours I spent with him and his wife, Jane, as he reflected on the  various people; both the famous and the infamous, he had his picture taken with over the years.

I parked near the statue yesterday in order that I might place a copy of the two “personalized” stamps somewhere on the base of the monument; but, due to the rain, decided to wait a day or two. After I do, I’ll return in a few more days to remove them; but I wanted Bill to be able to join in on his hometown’s celebration of an event he wrote about often during the lifetime of two significant citizens of Sonoma County, California, USA, in their  own unique way.  (RIP, Bill and Fred)