Once, again, quotes “straight from the horse’s mouth” (no, not Kenilworth the horse)), but reporters who were responsible for the following excerpts taken from articles in the 1844-1955 Centennial Celebration edition of the Argus-Courier (8-18-1955), and the Press Democrat’s Centennial edition, “Building he Empire,” October 1956, confirms our identification of the July 1910 photo of Wiseman’s plane was definitely taken at Kenilworth Park. Note: Part III  may not make sense unless you have also read Part I  (2-28-11) and Part  II (3-2-11).\

The story of the Fourth District Agriculture Fair, from the first one held in September 1867, to the one this year (1955) is a story of continued growth and expansion. (For example) The first Fair in this locality… under the auspices of the Sonoma County Agriculture Society, was held at Straubville at the intersection of of the Middle Two Rock Road  and Bodega Avenue. A pavilion was erected and ground enclosed as a spacious track for exhibition and trial of stock.

May 1868: This fair was held at the new fair grounds, located on Fair Street, where the present high school building now stands and fairs were held there until the formation of the Fourth District Agricultural Association in 1880.

1877: The pavilion was enlarged, by extending the west wing 40 feet.  A large number of stalls for horses  and stock were built, and the whole grounds were overhauled and repaired. 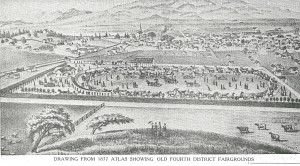 1878: The grandstand was enlarged by one-half its former size, trees were also planted.

1881: Quoting from the history – “Not withstanding the large amount of money that had been expended in fitting  up the ‘old fair grounds’ in the northern portion of the city of Petaluma, it was found that the city of Petaluma was cramped for room . Something had to be done. The society determined to sell the old grounds and purchase elsewhere.”

One hundred acres were selected on the eastern edge of the city, a mile track was graded put into excellent condition and the pavilion, grandstand and other moveable buildings from the old grounds were put up. Several acres of shade trees were planted.

1888: After several years as the site for the fair, the grounds were sold to Harry Stover who operated a breeding farm for horses and a race track. The park was named Kenilworth in honor of a horse by that name that was owned by Mr. Stover. (Very few fairs were held after 1888.) 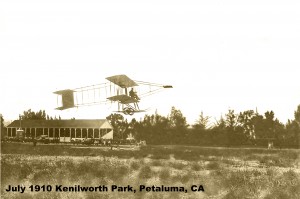 1935-36: After Mr. Stover’s death the City of Petaluma purchased Kenilworth Park and in 1935 the Fourth District Agricultural Association was once again revived and in 1936 the first fair was held at Kenilworth Park.

Conclusion: The photograph of Wiseman’s plane in the previous blog (Part II) was definitely taken in Kenilworth Park, Petaluma, California.